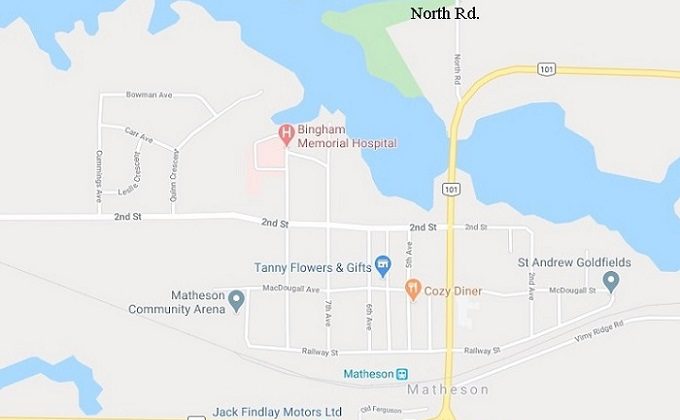 As you can see from this map, North Rd. meets Hwy. 101 on the wide curve just as you come off the Black River bridge in Matheson. Two people died in a house fire on North Rd. on Friday. (Google Maps)

We still don’t know the identity of the victims of a house fire near Matheson last Friday.  All police are saying is that they want to talk to anyone who was on North Road that day.

OPP got a call just after five in the afternoon about the house burning.  Two people died.

If you were on that road that day, investigators ask you to call provincial police or Crime Stoppers.

Two people have died in a suppertime house fire in a rural area of Matheson.

Provincial police say they got the call to North Rd. shortly after 5:00pm Friday.  Few details are available right now, as the investigation is in its early stages.  Participating are OPP crime and forensics officers, the Ontario Fire Marshal’s off and the chief coroner.

They’re looking for any helpful information, either directly to the OPP or Crime Stoppers.

Police say there is no public risk, although residents can expect a lot of OPP vehicles and officers in the area.