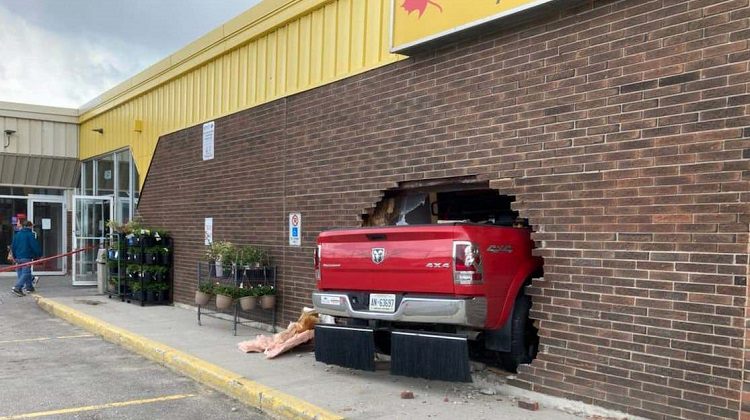 A pickup truck is about three quarters of the way into the Porcupine Mall near the Giant Tiger store on Sun., May 31, 2020. (Photo submitted)

*UPDATE AT 10:45am Monday from Timmins Police: “Matter is still under investigation, impairment not an issue. 86 year old male driver from Timmins and his spouse sustained only minor injuries. Truck is still in place as a plan is needed to extricate the vehicle in such a way that does not cause further structural damage.”

*CORRECTION AT 9:50pm*  Earlier versions of this story indicated the truck ended up in a vacant space of the mall.  It is now corrected to say an office space.

*UPDATE AT 7:30pm* Timmins Police say the driver of the Ram is an elderly man.  His spouse was his passenger.  Injuries are minor.  The Timmins Fire Department is reluctant to remove the truck before determining the structural integrity of the wall.

A pickup truck smashed through a brick and concrete wall at the Porcupine Mall on Sunday afternoon.

Someone on the scene tells My Timmins Now Dot com that  Giant Tiger closed shortly after the incident, although the truck is about three quarters of the way into an office space just outside Giant Tiger.

The mall was the victim of a fire that spread to the building from a burning garbage truck on June 19, 2014. Again, the fire was on an outside wall of Giant Tiger. It was closed for eight months that time.

MORE DETAILS AS THEY BECOME AVAILABLE. 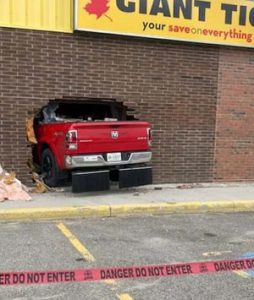