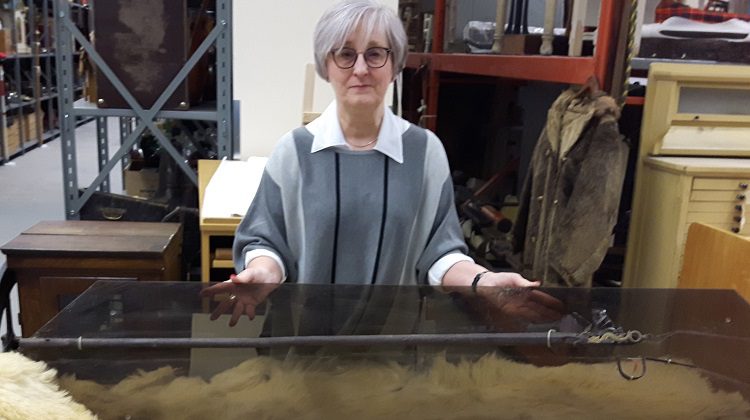 Timmins Museum director-curator with the rifle found along with the young indigenous hunter's body on the bank of the Frederickhouse River. It will be incorporated into the museum's permanent display. (Bob McIntyre, MyTimminsNow.com staff)

In our weekly visit back in time to Timmins’ past, we head to a spot on the Frederickhouse Rive, just east of the bridge.

Timmins Museum director-curator Karen Bachmann points out the cairn that’s been there since the early 1950s.  It commemorates a hunting party a decade earlier finding the body of a young man and the remains of a rifle.

“Police got involved, things went out to forensics and it was discovered that the body was about 200 years old,” she says, “and it was of a young Native boy, they figured probably in his late teens and he had been on a hunting party.  The rifle next to him was the remains of a Hudson’s Bay trading rifle.”

“The remains of the rifle were kept by the Chamber of Commerce until such time as the community developed a museum, which they did back in the 1970s,” Bachmann continues. “So when we do our permanent exhibit, we are hoping to put the rifle on display and tell the story.  So you can come and visit the rifle at the museum and pay your respects at the cairn at the Frederickhouse River.”

The remains of the young hunter are buried under the cairn.