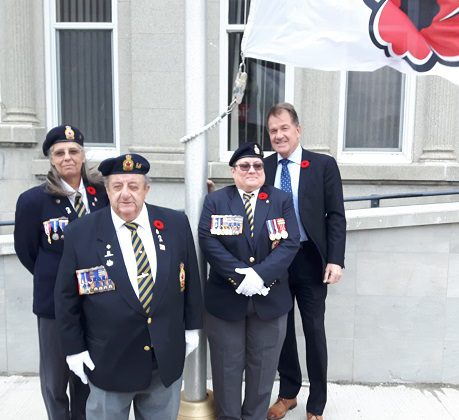 On November 11th, we take time to remember those members of our armed forces who served, or currently serve, in the name of our country, and it’s people’s freedom.

In Timmins, there were a few different ways that Remembrance Day was honoured:

In Timmins, the Timmins Cenotaph was the main gathering location for Remembrance Day. The ceremony was preceded by a parade, which led to the Cenotaph. At the ceremony, former and current members of the military spoke, read tributes, shared stories, and took time to remember those who fought for our freedom, and those who continue that fight.

Moose FM was there to capture the entire ceremony on Facebook Live, which you can view below:

At schools across the region, ceremonies were held to honour Remembrance Day. Moose FM’s Bob McIntyre was able to attend Timmins Centennial’s ceremony, where students paid tribute to the armed forces, each classroom laid a wreath, and took part in a moment of silence.

Here at Moose FM, we take that responsibility seriously. That is why we cut out of our regularly scheduled programming to air this segment on Remembrance Day. It is a collection of thoughts, reactions, and stories from our past. It began airing at 10:53am, so that the moment of silence played at the stroke of 11am. As you can hear, Theory of a Deadman’s “Santa Monica” is cut-off, and the segment ends with the playing of The Trews’ “Highway of Heroes”, a tribute to the armed forces.(For copyright purposes, the entirety of the song cannot be played)

How did you honour Remembrance Day this year? Please share your experiences in the comments below.