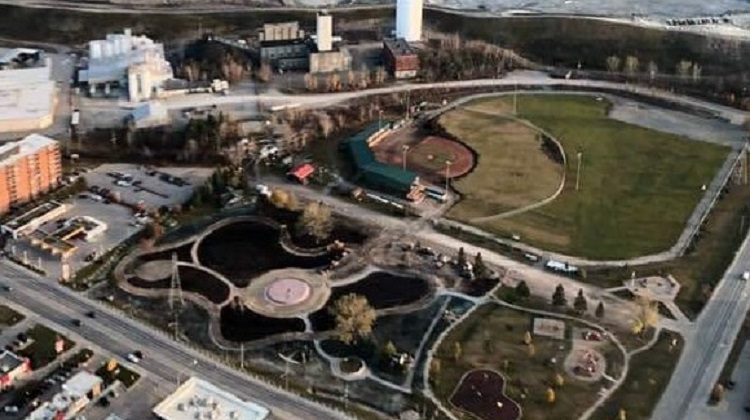 An aerial view of the Hollinger Park. (City of Timmins)

The city says everything is ready at Hollinger Park, for the skateway to be open this winter.

Some of the final touches on the restored park had to be carried over to the spring.

Project supervisor Gerry Paquette says the central plaza can’t be completed… because of the onset of cold weather.

“There was delays with the contractor getting the special forms from the supplier,” he explains.  “They only came in last week.  Given the weather conditions, it would be a lot of added cost to hoard and heat to pour the concrete at this stage.”

Fencing will be moved shortly, to give snowmobilers access along Algonguin Boulevard to the Shell station and to allow parking for the skateway.

And good news for baseball players and fans:  the game will be played in the ball park at the Hollinger next summer.

Paquette says there’s just a bit of siding work to do on the grandstand.  The infield is ready, and there’s only a small amount of work left for the spring in the outfield.

“Sodding will start as soon as possible and as soon as the sodding takes, the field will be ready for use.”

Stage 3 of Ontario’s reopening being considered now by officials