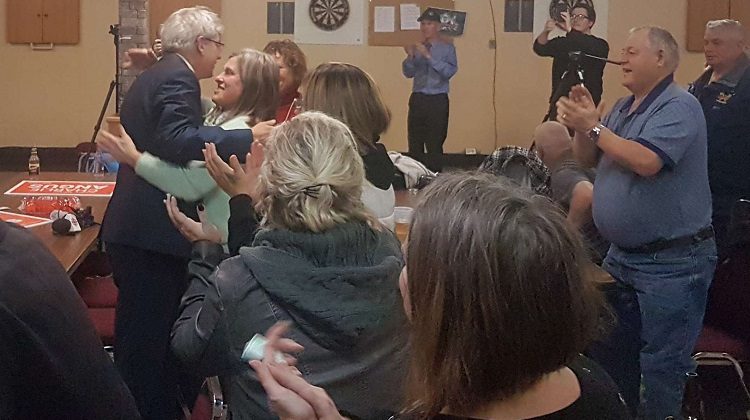 Charlie Angus walks into applause and the arms of supporters at his victory party at the Porcupine Dante Club in Timmins. He won his sixth election as MP for Timmins-James Bay. (Shane Button, MyTimminsNow.com staff)

With more than 90% of the polls counted last night, his total of more than 12,600 votes bested second place Conservative Kraymr Grenke by a third.

Angus says electors knew there would be a Liberal minority. and voted for his experience.

And in a campaign characterized as the ugliest and meanest on the federal level, he says he has full respect for his four opponents, saying “that’s the north”.

Angus says he’s ready to get right to work on a couple of initiatives.

“I’ve been working with the Cochrane Polar Bear Habitat.  I think that’s a world-class facility,” he remarks. “I want to get back to meetings with them.  In the Timmins region, I’ve sort of kept this under wraps, but I’m really keen on working with the arts community on an arts centre in Timmins.  We’re the only centre in the north that doesn’t have a touring arts centre, and we have a symphony.” 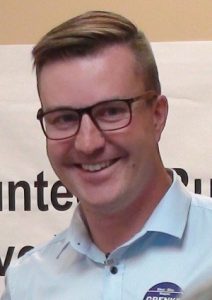 Don’t expect Kraymr Grenke to go away any time soon.

The Conservative standard bearer was second to incumbent Angus.

He says he knew this campaign would be an uphill battle, and he’s already looking forward to the next election.

“We can expect one sooner than later,” he comments on the minority government situation.  “As history tells us, it won’t be a four-year cycle so I’m very much ready to start prepping for that mentally and physically again.” 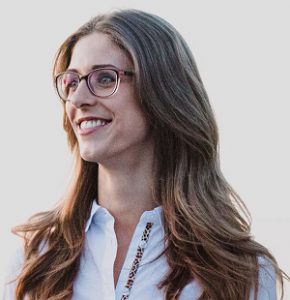 The Liberal candidate and Timmins city councillor says she’s surprised at the outcome in Timmins-James Ba, based on the desire for change she heard at the doorstep and at events she attended.

“At the end of the day, you know, the people of Timmins-James Bay made up their minds and I’ll be happy to work with Mr. Angus.”

“This has been a really good experience and I’m very passionate about our region, about our communities and about the work that needs to be done here,” she comments.  “So certainly, if I see an opportunity to be able to take on that task, I’ll go for it.”