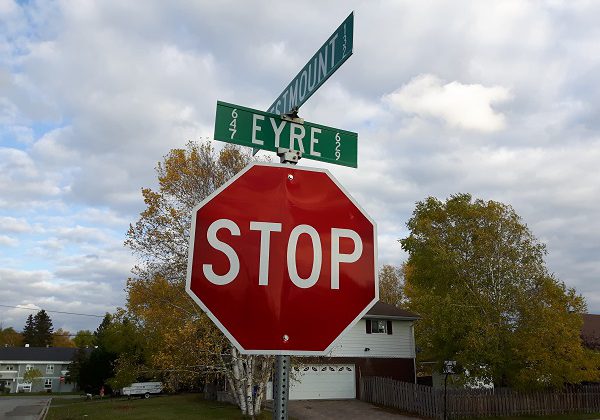 Eyre Blvd. in the north end of Timmins was named for Karl Eyre, mayor in 1948-49 and Liberal Member of Parliament from 1953 to 1957. (Bob McIntyre, MyTimminsNow.com staff)

Street names are among the things around us that we take for granted, without even considering that history is involved.

Karen Bachmann, director-curator of the Timmins Museum: National Exhibition Centre, tells My Timmins Now Dot Com that the naming of streets in Timmins started in 1916.  It was easier to use a street name than saying “I live across from the bakery.” Street numbers came later.

A  lot of the street names are reflective of history.

“We named a lot of them for mayors,” notes Bachmann. “ So Wilson Street is named for the first mayor; Eyre Boulevard, McClinton Drive, Fay Crescent are named for mayors, obviously.”

Bachmann goes on to explain that in the Hollinger townsite — which was built after the Frist World War —  the names are taken from famous battles.

“So we have Vimy; we have Cambrai; we have Messines, and then in the 1950s, Dieppe Street was named for Dieppe, after the Second World War battle.”

Next week, more about street names. We’ll also wander about an hour west of Timmins, for a story about how a certain small town got its name.