This photo of Circle K Confectionery was taken Sunday night while around the corner, police were closing in on the man they suspect robbed the store early Thursday morning. (Bob McIntyre, MyTimminsNow.com staff)

That’s what the containment in Schumacher last night was all about, as officers arrested a man just around the corner from Circle K, which was held up Thursday morning.  He’s also being charged with robbing Laundry Mack’s at Mountjoy and Bannerman the next morning. 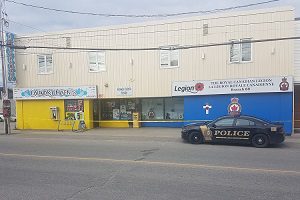 The 19-year-old faces a dozen charges involving robbery, using a firearm, and disguising himself while committing an offence.

– Use a Firearm While Committing an Offence

– Carry a Firearm in a Careless Manner

– Handle a Firearm in a Careless Manner

– Possess a Weapon for a Dangerous Purpose

– Unauthorized Possession of a Weapon

– Knowledge of Unauthorized Possession of a Weapon

– Use Disguise With Intent

– Fail to comply With Sentence -Possession of Property Obtained By Crime