Transportation Safety Board Looks for National Review after Gogama Derailment 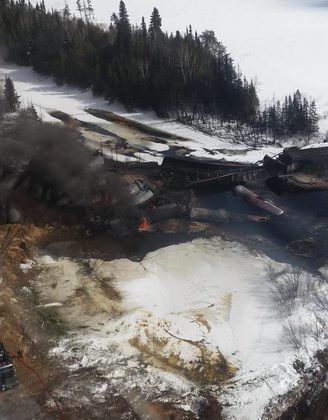 The Transportation Safety Board is calling for new rules around the transportation of oil by railway. The board says trains carrying dangerous goods need to slow down.

This announcement was made as investigators released their findings about the derailment near Gogama in February of 2015. About 29 oil tankers left the tracks just 30 kilometres north of Gogama with many of them burning for several days.

The board blames CN Rail for having insufficient training for track inspectors at the time of the incident. According to safety officials, the train was travelling slower than the 64 kilometre speed limit. Investigators say multiple inspections didn’t document the “pre-existing fatigue cracks” in the joint bars. This mixed with minus 30 degree weather and train impact caused the bars to fail completely.

Safety Board officials say CN has replaced about 40 kilometres of track in the Gogama area and improved inspector training since the incident.