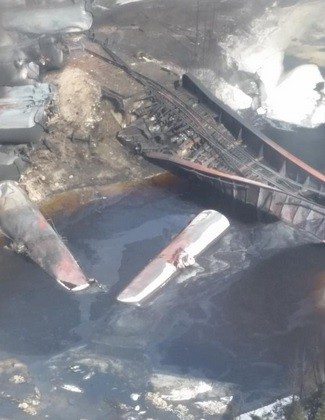 Photo: Taken shortly after the train derailment in Gogama, showing part of the oil spilled into the Makami River. Supplied.

Highway 144 saw almost a hundred protesters hit the pavement to raise awareness over the CN oil spill this weekend. Gogama and Mattagami First Nation residents are pushing CN to better its clean up efforts, saying the spill is continuing to affect the river and killing the fish living in it.

Nickel Belt MPP France Gelinas, who was also at the protest, has been actively pushing the province to help with the issue. At Queen’s Park last month, she asked the province to take action. She says CN spent all of last summer and fall trying to remove the oil, before the river froze over. When the snow melted, Gelinas says it was obvious to everyone that there was still a lot of oil in the water. She says you can see and smell the oil, and there are dead fish everywhere.

Gelinas also notes that the Mattagami First Nation was promised their environment would be brought back to its original state. Last year’s train derailment sent a million litres of oil into the water. CN maintains its statement that the majority of the clean up is done, and the water supply is safe. Photo: Some of the protesters on Highway 144 this weekend. Supplied by: Will Morin, Moose FM.