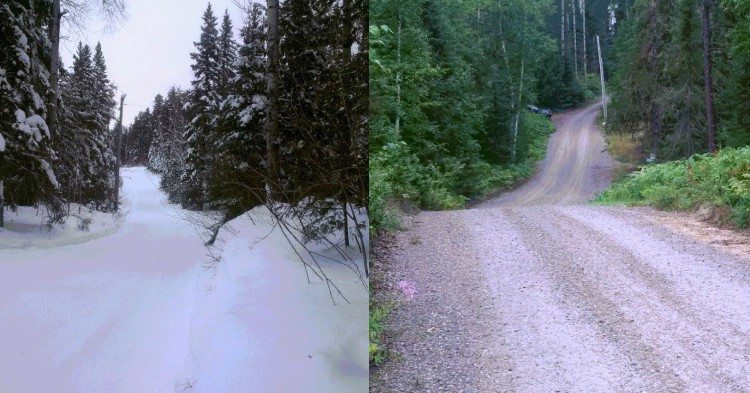 Photo: Showing the narrow sections of Charland Road, which the city would have to widen to allow for snowplows. Supplied by Ken Krcel, Public Works.

Preparing Charland and Bertrand Roads for snow plowing this winter may cost the city around $65,000. That is a preliminary number released by Public Works Manager Ken Krcel. Krcel says part of that cost is going to be widening the roads so the plows can get through, and installing a turn around large enough for the trucks.

This number comes on the heels of a council decision to maintain the roads in the winter, after a request was sent in from those who live on the roads. The two roads have a total of five homes on them.

Krcel also notes there are some liability and risk issues with the work, because they are single lane roads, which raises the risk of a collision. He says the current bylaw states that when no speed limit is posted, the default limit is 50km/hour. Which is the case with both Charland and Bertrand. So Krcel is asking the limit be posted at 20km/hour so it will at least lower the speed of drivers.

Krcel also points out that $65,000 cost is just to do basic work on the roads to allow room for the snowplows, and doesn’t include the actual cost of plowing or sanding each winter. He says those numbers are difficult to pinpoint, as it is a unique type of plowing. The city won’t know if it will be similar to a parking lot price or a road maintenance type price until companies bid on the work.

The city is now putting a tender for companies to bid on to do the work, and a more concrete cost will come out then.