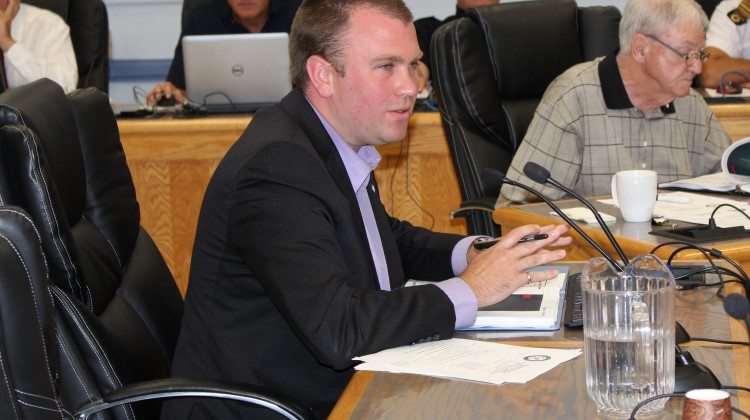 Photo: Mayor Steve Black takes the presenters chair at a previous meeting to update council on the aquatic centre. Supplied by Taylor Ablett.

Timmins Mayor Steve Black is outlining how the funding will work for the proposed aquatic centre, if the city decides to green light the project. With the numbers the city has now, it will cost taxpayers $140,000 a year over and above the current budget. That’s if provincial grants and corporate sponsors are secured.

This update sparked a debate around the council table, as those who oppose the plan say the city is already in debt and should be focusing on paying for the Connecting Link. Rick Dubeau, the only councillor to vote against moving the project forward, says the pool is a “want” and not a “need” for the city. He says times are very uncertain right now, as the city has the major road reconstruction to focus on, and the Kidd Creek and Goldcorp mines are set to shut down. Dubeau says that means the city will lose around $5 million in taxation, and now is not the right time to be pushing this project forward.

Mayor Steve Black countered that argument by saying he has been hearing for years that mines are going to close, and they have yet to do so. He says that day will eventually come, but the city is working towards bringing in international investors to help diversify the economy. Black says it is possible the majority of the community may not support the project, but he says the same is true for previous projects, like the museum, the library, and the police station. He says if the majority of the community doesn’t use a service, they don’t want to spend millions to support it. But, Black says Timmins is one of the five regional centres in northern Ontario, and says he is proud of what the city has going on.

Councillor Noella Rinaldo echoed those thoughts, saying she can’t imagine the city not having a pool. She says the pool isn’t a luxury, it’s a need for the community. She says Timmins has over 40, 000 people living here and a pool is a necessity. She says the city is at the point where it won’t a pool at all, if no action is taken. Rinaldo also notes that putting out the RFP doesn’t commit the city to the project, but will give council a better idea of the concrete costs so a final decision can be made.

At the end of the nearly 80 minute debate, the majority of council voted in favour of moving the project forward. That means an RFP is being sent out for contractors to bid on the work, and give their version of the construction costs. Black says all of the costs discussed right now aren’t “real costs”, as that number won’t be secured until the city signs a deal with a contractor.

A breakdown of the funding formula as proposed by Black: