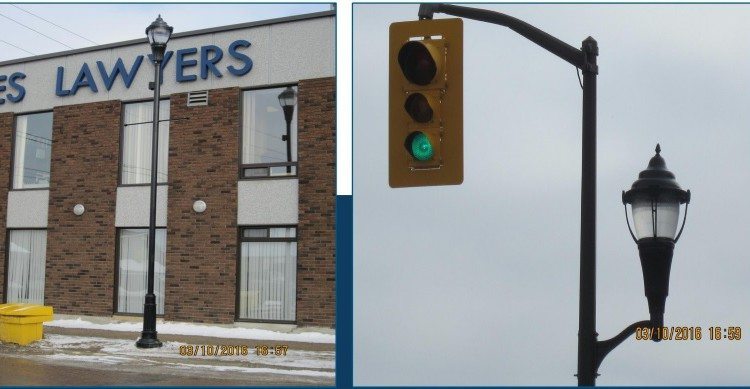 Photo: Some of the updated light fixtures downtown. Supplied by Real Term Energy.

Timmins is finishing up the LED lighting upgrade process. Real Term Energy is almost done in the city, as they have switched out the majority of the lights around town to the new energy efficient ones. The downtown core is now 85 per cent upgraded with decorative fixtures. However the company is still looking into some problem areas, as Mayor Steve Black says they have had complaints about dark spots around town.

He says they have identified 11 areas with large gaps between the current poles. So he says they have to look at those spots and see if there are existing poles in the area they can add lights to, or if they need to add poles.  Black says that is a more expensive venture, and if that’s the case than council will have to decide if they want to go that route.

However on the bright side, Mayor Steve Black says they are seeing  a change in their monthly costs. He says they have seen a significant difference over the past couple of months, although no formal numbers are available yet. The change in the billing will allow the city to allocate the saved dollars to pay off the project over the next couple of years.

Black says a large return is expected, with a reduction in Hydro bills through the street lights. He says the city is expecting a report on those exact numbers in their quarterly financial update.